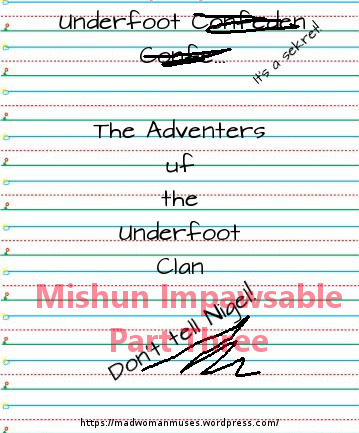 Missed Part one and Part two?  Click on the links to catch up!

They each took their snacks and sat in the large lunch room.  Every time Ralphy wanted to say something, the others would shake their heads.  They all knew the problem was now two-fold.  Getting Mama Leone out of the kitchen was the easy part.  Getting Robin out of there and keeping her out as well as keeping an eye out for Nigel was going to be tricky.  Kevin sat bolt upright in his chair when he heard footsteps halt behind him.

“Good morning, Kevin.”  It’s a soft voice, and he blushed.  It was Vikki, and could never figure out why he blushed when she said hello to him.

“Morning, Vikki.” The others shot back in unison before Kevin had a chance to reply.  A sly smile appeared on her face as she laid her hand on his shoulder and looked at his friends, her milky eyes always looking into the distance, “Does he have a problem with his voice this morning?”  Kevin’s eyes went wide and he turned another shade red.  This eight-year-old-girl was making him nervous.

“Well then, I guess I better find my seat.  See you boys later.”  They all waved as she flipped out her cane and tapped her way to her seat.

Kevin stood on his chair and leaned over the table, glaring at Charlie, “What’d you say that for?”

“She was waiting for you to say something to her.  Why can’t you just say something?  You always freeze when-“

He waved his hand in dismissal, “We have more important things to do.”

“Do you now, Master Kevin?”  All four froze in place as Nigel came out of the kitchen and sat next to Kevin.

“What could possibly be of such importance to a small group of five to eight year-olds?  Hmmm?”  He took a sip of his tea.

“New tree climbing techniques,”  Raphly piped up before anyone else could answer.

“Really?”  They all nodded, “And ‘ere I was thinkin’ you were up to nicking Mrs. Randall’s Fudge today.”  They all put on their horrified faces.

This time Charlie spoke up, “She’s making that today?  Doesn’t she usually make fudge on the weekends?  A Tuesday is a bit weird.”

“Normally, yes, but today is a special day.  One would think, with as much as Miss Vikki affects him, that Master Kevin would know what day it is.”

Kevin looked confused.  “What day is it?”

He plopped his elbows on the table and was just about to place his head in his hands while still on his knees in the chair when a female voice with an authoritative British accent spoke, “You know better than to place your elbows on the table, Master Kevin.  Must we go through etiquette again?”

“Very well then, and sit on your bum.  If you need one, there are booster seats.”  Raphly began to snicker.  Kevin shot him a look, and sat correctly in the chair.  She stayed behind him until Kevin sat properly.

All four boys were snickering by the time Nigel had found a seat.  They quickly finished their snacks and returned to their hideout.  Kevin looked at the plans once again.  He held his right arm with his left and tapped his forehead with his index finger.

“Dis is going to be tough.  How did he know we were going after the fudge, Kevin?”

Shrugging, he looked back at Sammy, “I don’t know.  He always knows.  It’s like he’s magic or sumpfin.”

They all stared at the floor plans once again.  They would take turns pointing and voicing their idea, and the others would shake their heads.  After twenty minutes of this, Kevin shot his finger straight into the air, “We needs a straction!”

“We already know that, Kevin,” added Charlie, “What’s your idea?”

“Whiles you are being feds by Mama Leone, Sammy can get Mama Robin’s attention and by then, Mrs. Randall will have moved her fudgies.”

Ralphy raised one eyebrow, “How does dat fix our problem, Kevin?  If she moves it, won’t she put it somewheres we can’t reach it?”

“She always takes her fudgies to the third floor when she is done making dem.  She always puts dem in the same place, too.”

Charlie’s eyes got wide, “The cupboard next to the ceiling vent!”  Kevin grinned stupidly, and nodded his head, “Dis just might work.  Sammy, we’ve got two plans to make up.  We’re going to use our pestering plan, too.”

“Yep, Raphly, that’s where we keep bugging Mrs. R until she moves the fudgies to the third floor.”  They all smiled and nodded in agreement, “Now, on to the rest of the plan.”